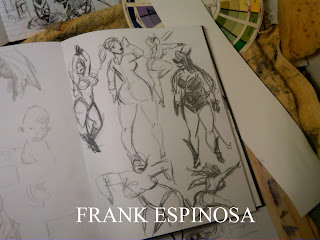 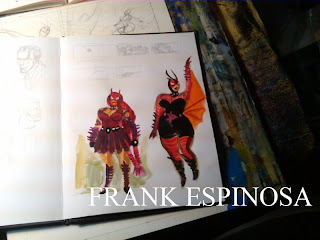 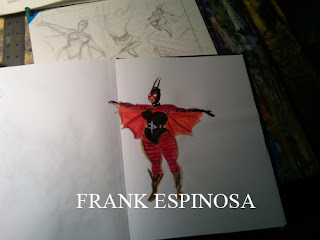 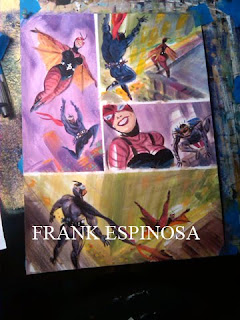 Been under the weather the last bunch of days, some sort of cold/flu thing. Wow.
One moment I was jumping around the next. Tyson punch.
Anyway hopefully I can add some new stuff soon, but here is more of the pages for the Image book I am working on.
I added some character sketches I did in designing the girl character. You can sort of see the evolution and how it turned out in the finished pages. I like to take pics of the pages as I work on them, for some reason the really crappy quality, helps in seeing how things read. Or if they don't.
The first book has two more pages to go to be finished, so if I could make it to my drawing board, I can knock it out for the weekend.
Also I am going to be displaying some Kirby inspired art very soon at a place in N.J I will give more details as the date approaches. So if anybody is around and wants to come in and chat that would be great.
And there is a lecture at Stanford U that I will be giving so more stuff on that next week, to anybody in the west coast that wants to say hello, that way you can grill me about the new Rocketo book in person.
Best to all. Have a great weekend.
Back to bed.
Posted by Frank Espinosa at 12:00 PM 1 comment: 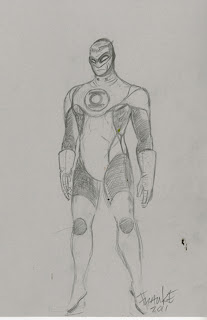 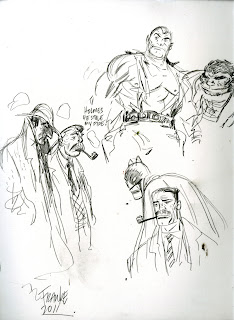 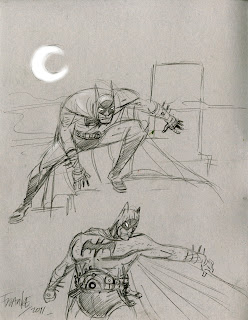 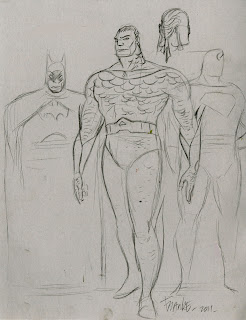 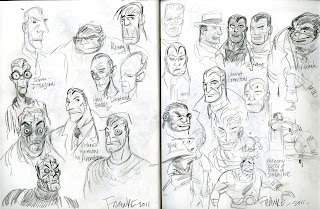 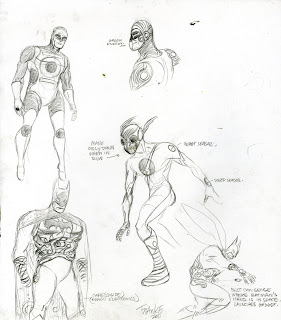 Excuse the delay, but I been busy working on that Image book and it takes my days in a good way.
Here are some quick sketchbook ideas that were running through my mind these days.
Personally I think the costumes of Superman and Batman are so iconic that to change them is just a mental wheel turn, eventually you wind up back to the iconic shapes that work the best. If it's not broke, don't fix it. But every once in a while its good to play around with these great modern myths.
In the mix are some Doc Savage sketches, mostly very rough and just explorations.. Again just playing around, but the mind wanders and it takes me back to all the Doc books I ever read, and how much fun it was to engulf myself in that world.
So as part of the revision, I was playing around with having Doc, half African American. If my memory serves, Doc was born on a schooner off the coast of Andros Island, which is off the Bahamas. So I played with the idea that here is this African American man in the thirties, hiding his own race, or maybe even not aware, what a fun concept. It adds a whole new level to that great character, something he can struggle with. And there it will stay I guess.
The other day a friend of mine sent me some funny Aquaman stuff, and it seems like that poor bloke, can't be taken seriously. So I played around with his scale a bit, made him the tallest and the widest of the JLA, as well he should be. That insane pressure would have worked wonders on his half Atlantean frame.
Green Lantern was fun to play with, I have not seen the new film, but I think his suit should exist apart from the power of the ring. When the ring power goes out, he will be naked in space, not a smart thing for the Guardians to design. So it should feel more like an alien space suit. Something that can keep him alive if the power goes out, I was thinking the suit would grow around him, while in deep space, freeing the power of the ring and his will power for the task at hand.
Flash needs some protection from little dust particles while running at that speed, and he needs to breathe. Again some protection growing out of the wings on his head might be fun to explore.
So with all due respect to the great artist and friend, David Williams who is by far the man who has drawn the most Batman revisions I have ever witness, and some of the best Batman, Superman concepts. Here you go.
Now back to the work at hand..
Best to all!
Frank.
Posted by Frank Espinosa at 6:50 AM 2 comments: