Here are some panels from some of the pages that are being worked on.
The color is rough and tumble and just to see if everything is reading at this point. When I color the work I like to do it all at once so I can set up a rhythm for the colors, based on emotion, design, and mood, but every once in a while, a panel sticks out when the full page is scanned, and I cant wait to see what a little color will do to it. When I start on the next book, Rocketo Journey to the Broken Moon I would like to paint the entire thing by hand. Right now time is running, and its best to tackle the thing with a bit of computer help.  Although I plan to add some "real" paintings to the covers and to last pages of Journey to the New World, this would be a nice way to end each cliffhanger.
It's cloudy, windy and looks like rain.. and this is the daily weather cast for lovely grey scaled NYC.
Frank.
Best to all today.
Frank.
Posted by Frank Espinosa at 8:00 AM 6 comments: 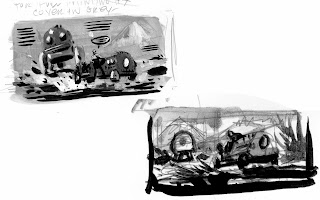 I thought I would show of the steps and the thinking that went into working out a Rocketo page.
In this case, it was going to be a nice long panel, maybe, taking up half the page. The idea was simple enough Rocketo and Spiro leave their ship to go exploring in the new world. The thumbnails are really small, and I group them in one page, originally they are on two separate papers and they are both so small that if I scanned the entire pages, it would be hard to spot them. 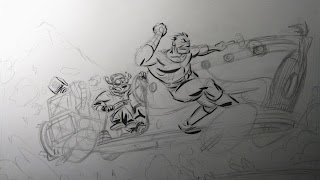 So out comes the Bristol paper. Now normally if this were a painting I would use an Illustration board, but when working on a comic, I try to keep the Illustration board work down to just the covers. I sketched out the figures and once a couple of corrections were done, I started the inking on part of them, just so I could remember certain details, that would tell me more about the flow of the action. 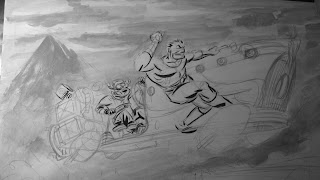 keep it flowing now. The sky tones are put in as quick as possible, so I can control how much white of the paper is going to show through, that way my values will be a bit more controlled in the end. Another reason is, just to get the ball rolling... we all have this fear of ruining the picture, I like to ruin it as fast as possible. From this point on I better work at fixing the blasted thing. 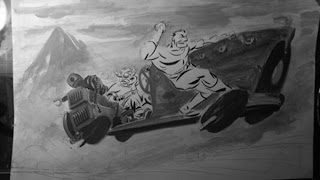 The values of the car are thrown in, big thinking at this point. The textures of the car and some of the forms that I like to bring out are played with in very fast strokes. 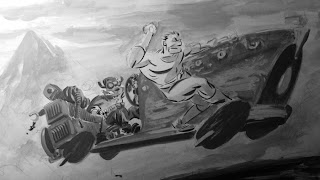 Once some of the values of the car are worked up, I go back into the characters at this point about twenty minutes or so has gone by. I use a hairdryer to dry the paint even quicker, yep, the pages warp a bit, but since I want to scan these, it's not a big deal, I can always flatten it later.
This is were it slows down a bit. The characters shapes are blocked in, and some back and forth happens between car and characters and background, everything starts to erupt fast at this point. I pretty much work this sucker up to the finish state.
Now, remember the thumbnail, it shows a big ship at the end of it, well I threw out that idea and wanted to add something a bit more open, to give the feeling of a big vista. This story is called the NEW WORLD, not the New ship. So now the panel upgrades to a nice double page spread, that took me by surprise. 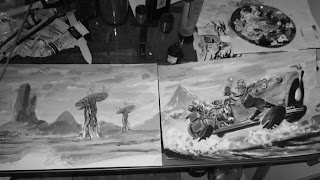 Here is the rest of the background, same process, big strokes and quick shapes. In fact the background takes even less time, because it's nice and loose and should not have fine details to it. There is still foreground work to be done so I tackle that and soon it's pretty much done. It's back and forth and sideways, going back from dark to light and light to dark. 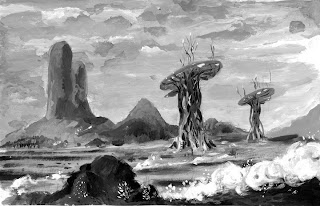 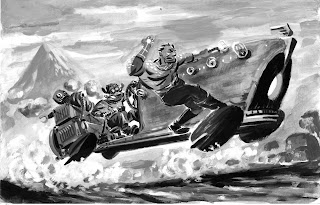 Here are the two black plates for the pages, more or less at a ready point for the next steps it will take to finish it. Basically it's not finished until the lettering gets put in, and the color is final, the borders are defined.. that is when its ready to send out, but at this stage its fun to see where it can still go.

A very rough color, shows me how the values and textures will look with some color on top.

Best to all.
Frank.
Posted by Frank Espinosa at 6:36 AM 8 comments:

Its going to be a long journey. 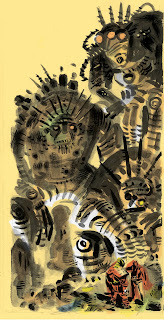 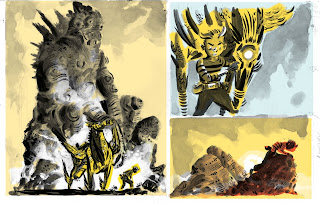 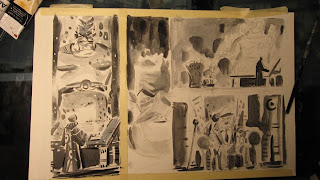 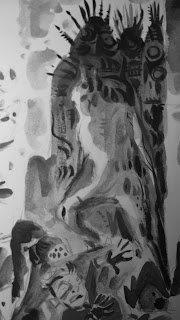 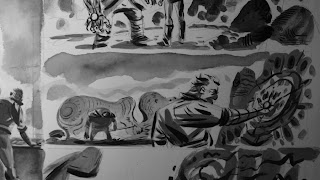 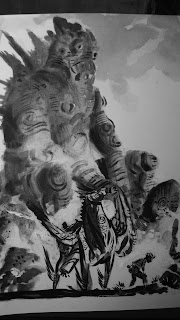 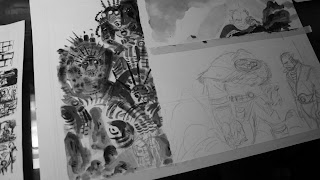 I have been working away at the New World, and wanted to share some of the pages as they are being worked on. Many of them I just took digital pictures of, because its tough to stop and scan a page while the madness of creation is pounding away. But while the layers of washes are drying, and if I have enough brain left, I manage to snap some pics.
Here are also some of the pages, after all the washes are done.. I drop in some very quick color just to see if the washes will show through, if I need to lighten or darken something to make it read better. This color is not final, just a study in contrast.
I find that every page is different, I wish I could say I have a system worked out, sometimes I put in the blacks first then work up to light, other times its light and then blacks, it all depends on the mood or the feel that particular page is trying to convey. What I like is the feeling of surprise at the end of it all, as tight as the thumbnail sketches are, they loose some of their meaning when they are blown up and put on the actual page. Some pages have no thumbnail period, they are roughly sketched out and then taken to finish, that way, like I said before, it surprises me and keeps me involved in that world. Its hard to loose sight of the entire project, without the thumbnail sketches, but the actual project is the finish page, I found if I can leave room to create and think on the page itself it lends a more fresh look.
Keep moving.. keep moving, all I say to myself, work it out, and then move on to the next page.
Work it out page by page, do the work. One can't think himself out of a problem.
Like the Old Man and the Sea, one must go into deep waters to find a nice big fish.
Best to all.
Frank.
Posted by Frank Espinosa at 9:43 AM 7 comments: