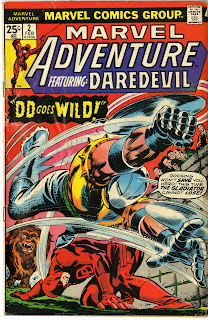 Gene Colan passed away today, he was 84 years old.
I remember when I first saw Gene's artwork, it was in a Daredevil comic and I must have been around ten years old. I thought the drawings were going to jump off the page, Daredevil will do his famous double back flip right into my chest. I have always been fascinated with movement, how things shift and twist when in motion, what part of the body drops while the other pushes forward.
I never met Gene Colan, never had the chance to thank him for helping me understand movement and rhythm, and all the other complex wonderful things that the body does, while at the same time never letting me forget storytelling.
When I heard he passed away, I went into that old closet full of comics, stuck my hand in a grabbed a bunch of books, and sure enough in that pile there was a Daredevil, the same one I scanned and used for this blog. Just look at that cover and feel it. It's amazing.
Gene passed away at Calvary Hospital in the Bronx.
I know that hospital very well, my father was there twice before he passed away, its a very tough place to walk into and even tougher to walk out.
Thank you Gene Colan and may you rest in peace. That fluid pencil of yours gave many young fans dreams.
Posted by Frank Espinosa at 4:41 PM 3 comments: 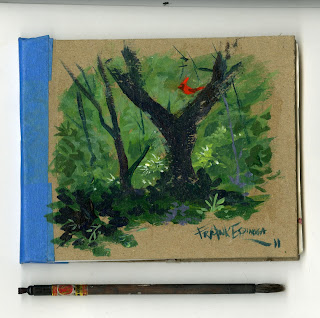 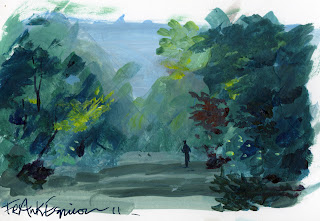 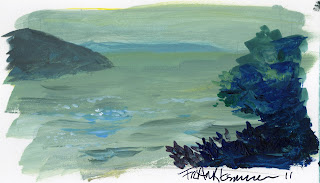 I wanted to share with you guys, my Bat-paint-Utility belt.
One of the things that I really enjoy these days is taking the time out to do some jogging around NYC. It a great day to clear the head and get the body ready for the long day sitting on the drawing board. Every once in a while I look around and think "that would make a great little painting.. or I wish I could remember that light." For a while I tried to carry a digital camera with me, but I just didn't like the feel of it.
So I got this fanny pack.. I know.. I know..
I got this fanny pack and decided let me see if I can get a little studio that I can take with me. I made a little folio of good quality 2 ply brystol that I cut down to a nice five and a half inches.. small tubes of gouache: black, white, three primaries. Two small brushes, a empty lightweight bottle of india ink, that I can fill with water from the public rest room, or the water fountains. Two small paper towels. Two small plastic tops to hold water in. Disposable palette paper, cut into small strips and folded into the folio.
So armed with this, I can go out for my run with very low weight and then be able to sketch whatever catches my fancy. Sometimes it would be a cloud, a brush, or maybe nothing at all. I been keeping a journal of my running and it might be a good way to add some illustrations to it.
Have a great weekend everybody.
Frank.
Posted by Frank Espinosa at 6:45 AM 4 comments:

new yak for the ages. 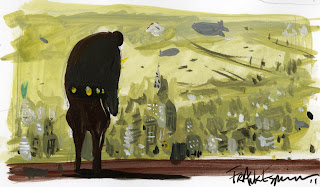 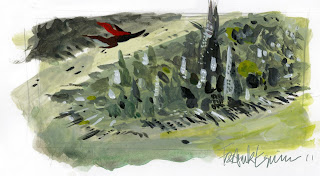 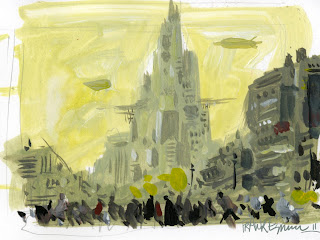 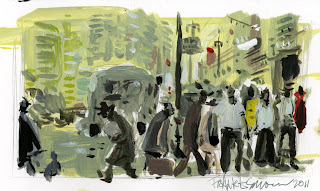 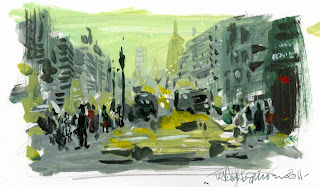 I was walking around the other day, and did some sketching around the neighborhood.
It was a research run on a book that I am working on called Ghost Whale. There are some post I did in the past showing the hero of the book, Belukha.
The little paintings are small nothing larger than four and a half inches, because of that I can do a bunch of them very very quickly, and just get a sense of the colors and how to get some of the city energy down. They were all done on the same sheet of paper.
Now Ghost Whale is a story that I been slowly developing and it's dear to my heart as it brings together a lot of the old pulp feel that I grew up with. Lets just say that it pays a nice homage to almost every single hero invented in the pulps. In the little paintings one can catch a glimpse of an old man in a giant skyscraper and of a flying man circling the city. Its fun, it has giant steam-men, robots, aliens, and my neighborhood of Washington Heights is a big part of the setting.
Enjoy the weekend everyone.
Best always.
Frank.
Posted by Frank Espinosa at 7:29 AM 3 comments: 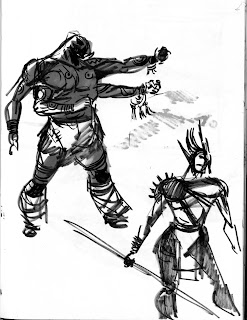 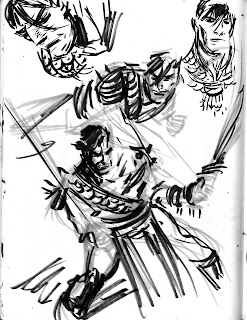 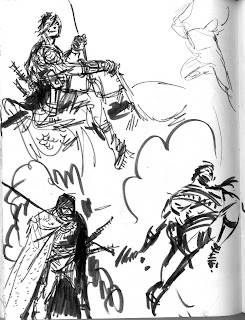 Yesterday I went for a nice long run, everything went well until the sun hit. Holy smokes, it was like running inside of a frying pan. Days like that force you to slow down, get off the stopwatch and listen to your body, or else you die.
My usual routine for a long run is to walk to the Little Red Lighthouse that sits under the George Washington bridge, and run from there. The lighthouse was made famous by a kids book, and has a very interesting story in its own right. I start at the lighthouse which is about 181st in Manhattan and from that point I can run almost to the end of Manhattan with almost no street lights and just the danger of getting hit by a bike or a rollerblader. It is a great run, parts of it shrouded in green with the Hudson river to your right as you head South. Clears the cobwebs of the mind.
Yesterday it was brutal. So I cut off the long run and headed back home in a big circle, with a total of seven miles, back to the Little Red Lighthouse.
I sat under the shadow of the GW bridge, looking up at its humming and cranking steel underbelly as the folks whizzed back and forth in the daily grind. My eye hit on two little floating things in the water, they were ducks, swimming Northward. Two little ducks with that giant bridge over them, and the giant swells of passing boats lifting their bodies up and down in that cold Hudson water.
Made me think about fear. Those ducks have no idea what is happening around them, they just swim because they have to. No choice you know. Sort of like artists.
I wondered if they had no fear because they were together. I guess being with another duck in that water would help. It's hard to swim alone in the Hudson. Nice to know another little ball of feathers has your back.
Anyway it all brings me to today's post on John Carter of Mars. Which has nothing to do with ducks or running, but it has to do with some sketches I did while I was at MIT after a lecture on John Carter of Mars. I guess I should talk a bit about that lecture of J.C but when I do I will post illustrations of ducks.
Be well all of ya.
Frank.
Posted by Frank Espinosa at 4:33 AM 8 comments: 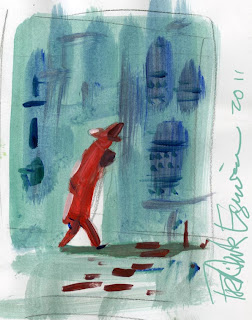 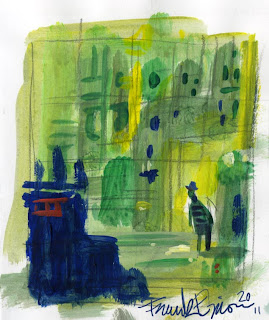 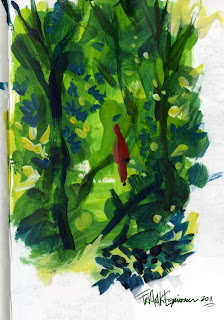 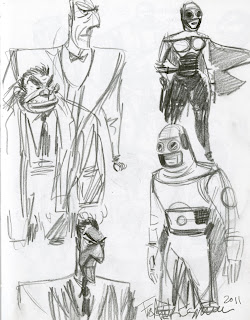 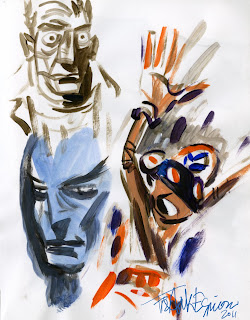 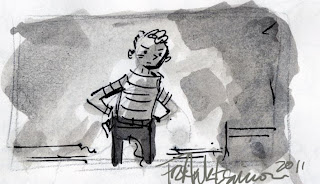 Anyway like I was saying...
Hello everyone it has been awhile and lots of stuff has happened and even more stuff has not happened. This is what happens when a bloke quits smoking.. he eventually goes mad. The good news is that I run like an old Lion, been logging in those miles at the track and finally the breathing and the legs are starting to come back. Anyway that would be some blog for a future time.
Speaking of the future, Rocketo is back on track and so is another little series that I have been doing some work for. I am posting some sketches that I played with and had some fun. Takes place in NYC, but unlike a NYC that we have seen in comics. Right now the title is The Belukha but I might go for the Ghost Whale later on.
So now the summer is here and those wonderful greens have come back and I feel like its time to hit the road and paint a bit of sunshine on the canvas or in the sketch book.
By the way if anyone ever needs illustration work done for children's books or comics let me know. I am available. I guess I should make a big post out of that later in the week. One of my big dreams is to do a bunch of children's books.
Best to all and sorry about that long gap in time, which I could have said I was kidnapped by Aliens or something but the truth is much more mundane, sad, with a touch of gray. Thank you for your patience.
Posted by Frank Espinosa at 1:39 PM 9 comments: