Working faster than anything I have ever done before, sort of liberating!
Hopefully another couple of weeks and this thing will be done. Here are two illustrations from Frankenstein. 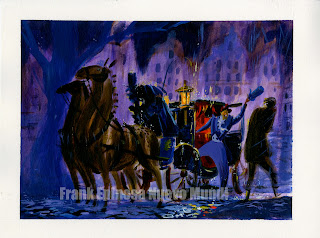 The first, is the scene after the creature has been created, Victor Frankenstein wanders almost naked through the cold rainy night, aghast at what he has wrought. Lost and scared, he is welcomed by an old friend who appears out of a carriage. One of the great themes in that book is the emptiness that comes after the long creation process. It is one of the reasons I choose that moment to illustrate. That feeling is something that artists, and writers feel first hand. More rain will be added later, right now time to move onward. 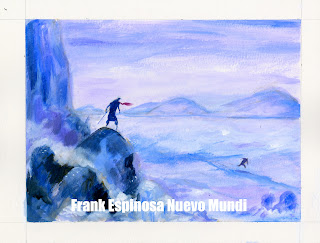 The other illustration is after the creature has told his version of events to his creator, Victor Frankenstein. I loved the description in the book where Victor talks about how fast the creature moves over the ice pack.  We are so used to the slow moving monster, that we forget that Frankenstein is the first superhuman ever created. He is faster, stronger, smarter than any being on Earth. 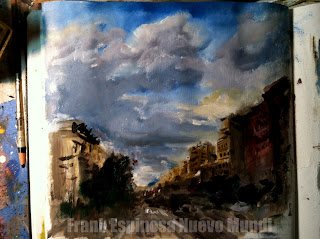 Went out with my oils and sat on 187 and St.Nicholas ave, what a place.. it buzzes around with a life of its own at all hours of the day and night. I figure while I am here I should paint some of the Washington Heights area, since I am working on a book on it.
So I sat there, mixing and painting fast while people walked around, and thought I was nuts.. this was just after it had rained, so the clouds were moving west.
Anyway, I realize that oils is not the greatest medium to put in a sketch book, walking around trying to make sure the pages did not stick was a laugh. I am sure I will do that again, but be more prepared.
Best to all.
Posted by Frank Espinosa at 6:36 PM 5 comments:

A quick homage in the wrong medium 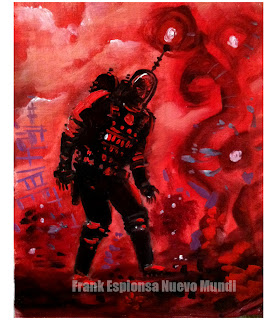 Acrylics is really the medium for a Clifford Geary illustration, even though many of his illustrations aren't really painted, but to capture that flat abstract sense, Acrylics would be my choice. Then again I am working with oils on Frankenstein and was to lazy to break out all the Acrylics. A fun experiment. But in order to get that feel I would have to wait for it to dry and then hit it again, and who has time for that.. This is as much as I can do wet into wet with oils right now, thought I would share, I can't scan this stuff, I would be cleaning the scanner for days. So excuse the cell phone pic.
Its my lunch time quickie, and now back to Frankenstein.
I cut up and old box that was laying around and it works great for these quick oil experiments. 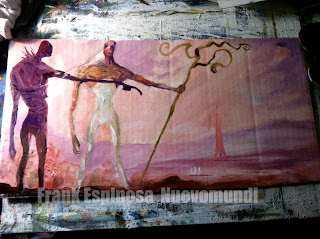 I had the great luck in my life of meeting one of the greatest Librarians that has ever lived.

One day I hope to write a story about her. She worked in PS. 189 at the top of Washington Heights. For some uncanny reason she took a liking to a nutty 8 year old kid who could not stand still, and kept drawing during the library period. and could barely read English. I guess she had two choices, hit me over the head with War and Peace, or feed me science fiction.

To my luck, War and Piece was over our age range and most likely not in the school library. So she gave me a copy of Sparks the Robot dog, it took a while to get the hang of it, but I loved that book. Soon afterwards came a copy of R is for Rocket, and Red Planet by Robert Heinlein. I devoured those books at such a rate that it surprised even me. For an extra treat the books had those amazing black and white illustrations by Clifford Geary that set my mind going. To this day I think he is one of the greatest kids book illustrator of them all.
When I had devoured all of Heinlein's books, I guess she had figured that my English was good enough to move on to the good stuff.

I was like some rabid junkie, going to her every week for a science fiction fix. It got to the point, I was reading so much, she talked to my teacher and I got to spend my lunch time at the library. It was heaven. Away from the kids that wanted to punch the living daylights out of me. I escaped into space.

One day I came in and, resting on her table was a copy of Ray Bradbury's Martian Chronicles..

It was much tougher than the R is for Rocket books, but Bradbury took me out of the Washington Heights fire escapes and onto the soils of the Red Planet. It took me a while to understand some of the themes he was playing with, lucky for me, I had the best Librarian in the world, who would sit with me and chat over tuna fish sandwiches, the beauty of the Chronicles of the Martians, and Fahrenheit 451.

Today I did without my lunch break and instead did a quick oil sketch for Ray Bradbury.
He took me away and brought me back, he expanded the mind, which is what writing is best at. The man loved art, music and words, and may he rest in peace.
Thank you.
Maybe there is a tuna fish sandwich I can whip up. Just for old times sake.
PS. the painting was done on cardboard that was going to be thrown out, two coats of gesso and it was great to paint on, I actually like that big crease.

Hello Everyone!
Just wanted to share another page that I worked up, and this time I managed to catalog some more extra steps. Again this technique worked for this painting but it might not work on others. I will post in the future some other illustrations that had an entirely different thought process.
Again there is the rough small thumbnail. 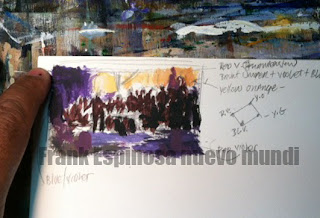 As you can see its all big giant shapes, it had to be treated as such because there are so many characters, they have to be thought of us one solid mass. I made some small notes for my brain on the side with the colors that I needed to work with. 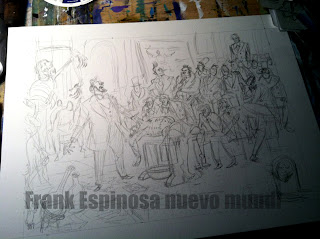 The next step is the pencils, here I put in a bit more work than usual, again because of the characters that I wanted to catch. I am letting the drawing evolve, putting in tons of stuff that later might change. The important thing running in my head is, how can I get the characters to read as a mass but keep their different traits. 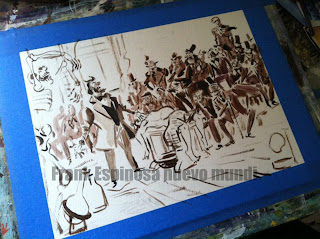 Here is the raw umber underpainting, its just enough to keep it loose for me, and tight enough at this stage that I can tell who the faces are, at this point I take a break and walk away.. I find its always good to break and clear the eyes. I put some tape at the sides to clear the borders and I am ready to paint. I am not crazy about that blue tape, but I had run out of the other I used, and it was cheap and laying around. That blue can throw your values off a bit so its good to color correct as I go forward. 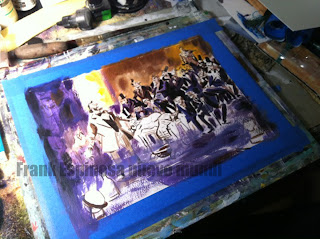 Now we have the first layer of paint, its all big and loose and the washes are applied lightly at first but with big strokes. My concern is to cover as much as I can right now and get rid of the white. Sometimes I would throw in an entire tone to to this, but in this case I decided to just move on with it. I did not want to sit around and wait for it to dry.
So I am working wet into wet, and moving forward. Right now, at this stage, one can give up, many times I have done just that. But this is Acrylics its very forgiving, so keep working on it. 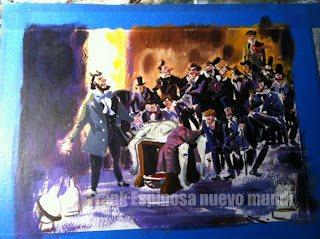 Now here is the fun part, I have painted over things that I took time to draw, in this case the skeleton was bothering me, it took over the picture so I decided to leave it until the end. the same thing happens to the foreground bottles, and the blackboard, again my thinking is to keep it simple. So I concentrate on the figures and let things breathe.
At this point I break and walk away. Much thinking to be done before I can paint again, without thinking. 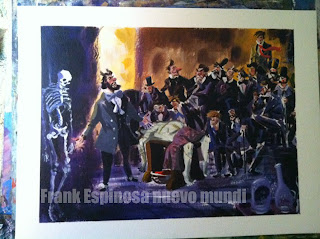 So finally I decide where the skeleton is going to go by just throwing the paint down. the glasses are moved to the other side. Again the decisions are based on instinct, and making sure the eye has an entrance point. At this point the painting is done, but.. there is more, the final painting will have oils on top, to smooth out some transitions and soften things up a bit. As soon as I do that I will certainly post it. Then again, it might be fun to see it when its all in the book.

Hope this helps, and more on the way. By the way Victor Frankenstein is the fellow with the bright scarf, I needed a visual hook for the audience to recognize, Victor from far away in other illustrations.

Have a wonderful day, its raining in NYC.. again.
Best.
Frank.