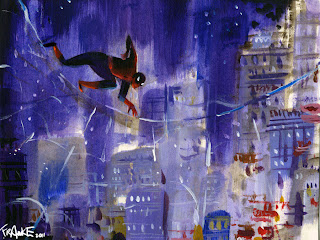 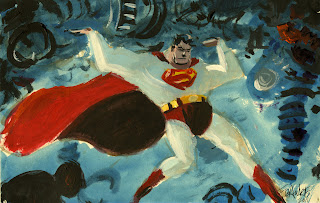 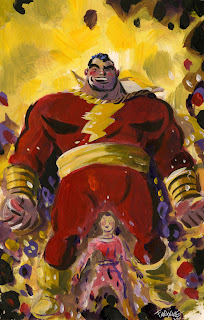 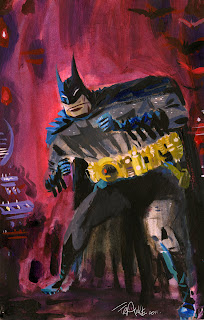 Sometimes after a day painting, there is a bit of left over paint on the palette that looks really nice and you do not want to throw it out. Or it happens that after loading up the palette with paint, something else needs your attention and not much painting is done, in both cases you get paint that you do not want to discard.
So.. I do these little playful sketches, I try to keep them small and loose and fast and the rule is, no pencil just paint, so that it flows out.. Anyway here are some of this weeks Lunch Doodles.
When I was doing the Shazam sketch I was picturing this little kid saying the magic word and becoming huge, since Marvel has the powers of the Gods, I was thinking he should be a giant that can contain the power of Zeus, Mercury, etc..
The first time I ever saw the adventures of Superman on Television, I was a kid and the television had colors that were all faded out. So I got to see Superman with this really light suit.. which is still blue but lighter.. gives him that feeling of a savior. Not like the dark Superman we have now.
Well I added todays lunch time funny, which was Spidey. I like the weird creepy Spiderman that Ditko used to draw. I was painting to fast for my own good here but hey, have to post it.
Anyway have a great weekend everyone.
Posted by Frank Espinosa at 8:47 AM