You are a strange man, Dr. Strange. 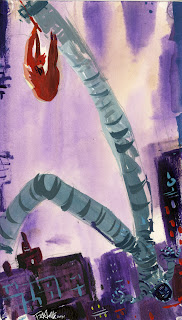 I remember reading Doc Strange when I was a kid, the Steve Ditko ones. Those were some odd, creepy tales. I had a friend who used to bring in tons of comics to school, can you believe this?!! His dad owned a newspaper store, and whatever didn't sell he was nice enough to hand to the kids. Imagine our hungry eyes, young, fever racked brains, feasting on the early X-Men, Early F.F.. early Avengers! They went like hot cakes.. Every went! everything but Doc Strange.. the kids around that school didn't dig him. So I wound up getting the left overs, and journeying into the mystic realms fighting the dreaded Dormammu!!
What a wonderful character, the Doctor, who loses the ability to operate on people journeys into the land of Tibet and learns the mystic arts. Comes down the mountain to kick demon ass.

there is a rumor that a Doc Strange film is in the works, which would be wonderful to see if they keep some of that insane fun and zany, dark, weird energy that Ditko brought to the pages. Lets all hope so.

As far as the Daredevil sketch goes, it was quick but I really liked doing it. I like to do a larger painting of that sketch. Stilt-Man was one of my favortie DD bad guys, he must be the lamest bank robber of them all. A ten stories high, slow moving, unbalanced target for Daredevils' kicks.
Thank you all who have asked for information and for commissions!
Best to you all.
Frank.
Posted by Frank Espinosa at 3:42 PM