"MY REIGN IS NOT YET OVER" 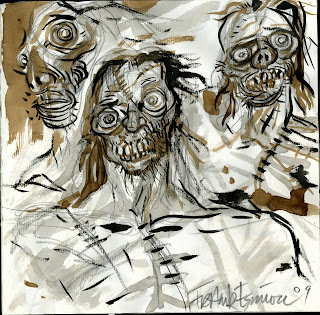 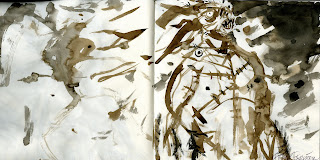 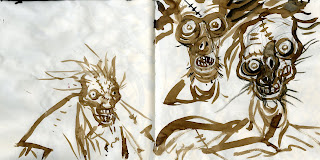 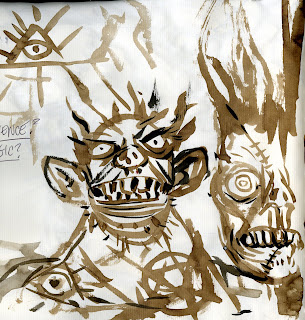 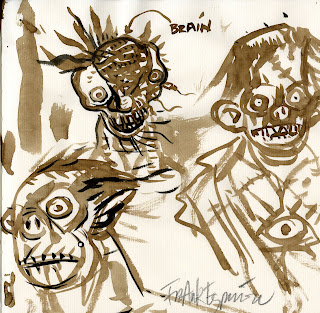 With those words, the monster taunts his creator.
I just finished re-reading Frankenstein. The last time I read it, I was in college, and now I wanted to refresh my memory of the famous novel. My mind was swirling with the images and symbols that Mary Wollstonecraft Shelley so wonderfully created. The passionate, obsessive creator works non-stop to make his work, only to abandon it after it's done. The creature, who in many ways is superior to man, searches for acceptance. Then in a horrid  turn of events, the creation recreates his creator, fashioning a vengeful madman who will pursue him to the ends of the Earth. In that one act, the monster has made his mate.
So now my pen takes a life of its own and starts to draw the Frankenstein monster. So many ways of handling, one can design this creature for years... and maybe I will just make it a point to keep playing around with the creation of it.
It would make a great film, an animated film. Serious. Dark. The ship coming through the ice, the sails snapping open sprinkling ice chips like stars. The men onboard, beards frozen, ply the ropes. Black cracks of ice spreading outward like a giant spider web as the ship breaks through. The gigantic figure of Frankenstein is seen by the crew, racing across the great ice shelf. When will animated films learn?
There was an animated film called the tell-tale heart by UPA studios from Poe's great story, the film is amazing. A great example of the animated form doing something different besides rabbits and gnomes...
Well here are some sketches, they are just the start, maybe as it progresses I will post some more. As I read books, I will be adding an illustration or two from them. It should be a fun experiment.
Next one: The Old man and the Sea.
Posted by Frank Espinosa at 3:03 PM