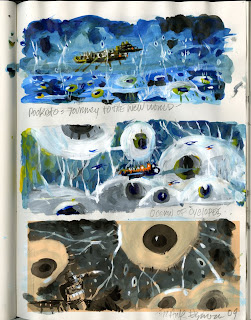 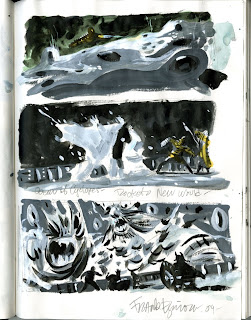 Rocketo's new Journey takes him and his crew to places that were never shown in the vol.1 Journey to the Hidden Sea. I look at that map and I see the names written on them, and now I realized its time to bring them to life.
The Ocean of Cyclopes is crossed by Rocketo and his new companions, while trying to escape a Lucernian War ship. Its a desperate act in the story, as the Ocean has never been crossed. The reason: there is no water in the Ocean of Cyclopes, just giant jelly eyeballs as far as our eye can see. Waves of swirling eyeballs, that if one stares at them, your worst nightmare or your biggest dream is shown to you. Many have plunged into that mire without ever coming back. Rocketo forces the men, to throw their weapons overboard, as the visions, they see will test their will power.
These quick studies in my sketchbook, help me to visualize the sequences, and to design that dreaded Ocean. These tiny drawings are a wonderful guide for me later, as things that I thought would look great turn out to be really bad or, every once in a while, if I am lucky...the visuals actually work. Then the time comes to let it all go and just let the page take over.
Slowly the journey begins.
Frank.
Posted by Frank Espinosa at 9:38 AM